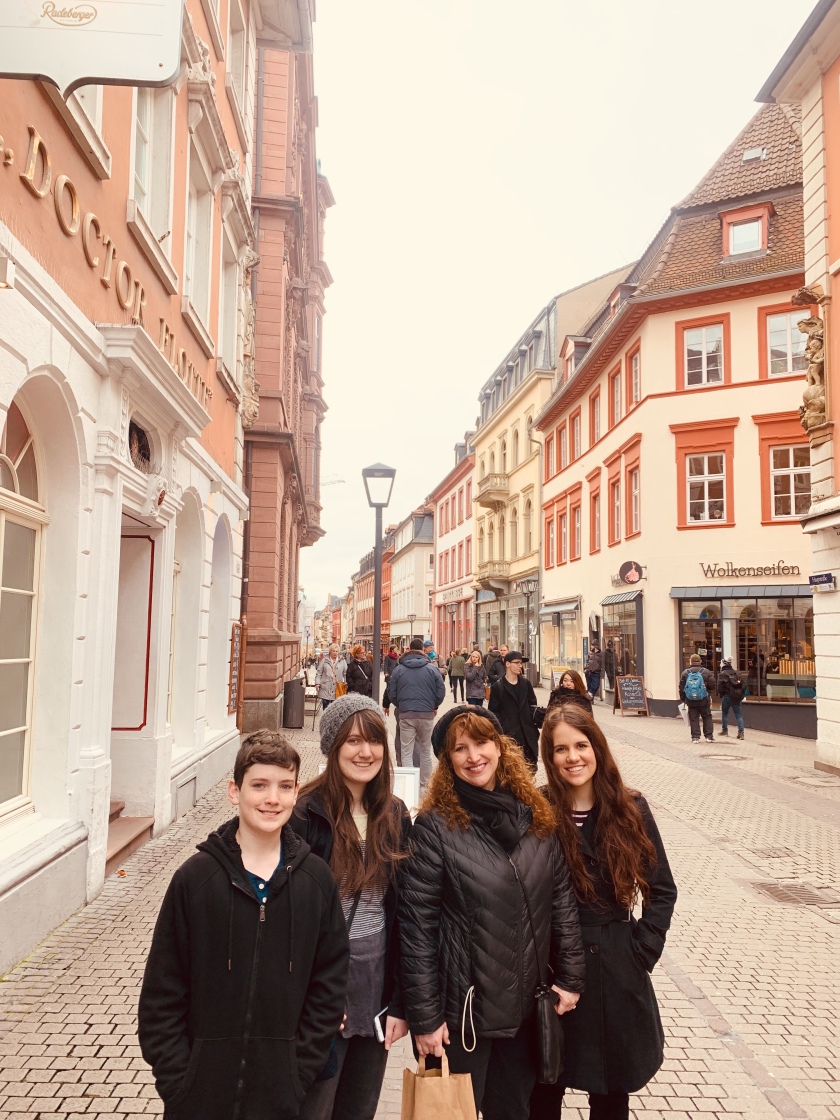 Monday night of this week we had a final supper with the Clarks before their departure to the U.S.  This is when they introduced us to a new food called the döner kebab.  This is a Turkish dish that is found everywhere around here right now.  We, in the states would probably call know some of its relatives, the gyro or shawarma.  It’s meat, usually veal or chicken cooked on a vertical rotisserie and then shaved off into portions and served in a German pita bread with vegetables and sauce.  This stuff is money!  So good!  After dinner we said our goodbyes and well wishes and headed back to our little apartment. We were on our own now, with high hopes of being a blessing to this church.

On Tuesday morning we moved from the little Airbnb apartment to the Clarks house.  Everything is smaller in Germany including the roads and cars.  However, we were determined to do this in one trip, so we stuffed everyone into the vehicle and then Lynn went about stuffing the luggage onto our laps!  It looked like a horder’s circus act, but we did it!  It’s a strange thing to move into someone else’s house and try to make it your own.  They actually have a larger house than ours back in the states with four floors counting the basement.  We aren’t used to stairs and especially ones that tend to curve upward and are hard stone.  I’m pretty sure it’s going to be a feat of great proportions if we all make it home without anything broken.  All of us have had a slip or two on the stairs as we are getting used to going up and down.  We’ve found that we don’t even go down without assessing if something needs to be taken with us, the same with going up.  I’m also hoping for some calories burnt by this as well.

That evening was our first Bible study night.  We planned on leaving early to make sure we got there before everyone and got the church set up with the tables to sit around for the discussion.  Well, we headed out a little bit later than planned and wouldn’t you know we got lost on our very first time out!  We left the house about 15 minutes later than we had planned.  It was dark out and our first time navigating out of the little town of Brühl and into Mannheim, which should normally take just around 20-25 minutes.  The Clarks had put the church into the GPS system of their vehicle, but she takes some getting used to.  She’ll say things like, “take a right and then go left,” this can be very confusing at times, but we’ve learned that she means that some exits on the right have you travel further down the road so we must stay left until our actual exit.  We didn’t know all of that then.  So, the very first exit we needed…we missed.  One of the quirks of the Autobahn is that if you miss your exit, you’ll probably be traveling a few minutes before there is another one where you can turn around.  We finally got turned around and wouldn’t you know we missed another exit!  By this time all of us were feeling the panic.  You know that feeling where you panic, and you can’t think about the simplest of solutions?  Well, we were there.  Poor Lynn!  I can only imagine how frustrated he must have been inside as he was trying to navigate himself while little miss GPS was also trying to navigate, and I was in the next seat trying to navigate him as well!  When we finally made it to the church it was 7:00 right on the dot!  Thankfully, the members here tend to run late, so we actually beat them all there anyway.  Whew!  It was dicey there for a few minutes!

We brought with us, from the States, copies of the study by Jim Berg called Changed into His Image.   I’ve been through this study twice already and still learn more each time.  It’s an in-depth sanctification book that’s great for discipleship purposes at pretty much any level.  We figured it would aid the discussion if we have an actual workbook to go through while we’re here, giving the participants homework each week to fulfill. This first week was just an introduction night as he explained the study and how we will go through it.  We also had a bit of a testimony/meet and greet so as to get to know some of the members a little bit better.  I loved hearing all of their testimonies of how they came to know the Lord and how they came to this church.  I’ve said it before, but I’ll say it again, I’m humbled when I realize what a small world we live in and how Christ has permeated all these different nationalities.

We also started back into homeschool lessons with the kids this week.  It felt good to establish a bit of a routine.  This, of course, has to be a flexible routine with all we have planned to do, but routine, nonetheless.

Late in the week we took the kids over to Heidelberg during the day.  We were still getting used to driving in Germany as well as driving a manual stick shift which neither of us have done for quite a few years.  We made it thankfully, but on one of our wrong turns we ended up on a hill of a street that certainly seemed one way since there was a stone wall on one side and it was so narrow.  But, no, not in Germany they figure you can get a few cars lined up side by side in the space of about two and a half meters wide – Oh wait! Let me speak American – that would be around 8 feet.  We decided to turn around in a driveway along one of the crests of the hill but backing out was also a challenge.  The Volkswagen that the Clarks own has a sensor system for backing up that beeps at you.  We are familiar with cars that have back up cameras that seem very helpful, but this just beeps and as you get closer to any objects it beeps faster and louder which is always a good mix for keeping the driver calm as he’s backing out in a dollhouse size area along a hill on which any second another car could come zipping around.   Thankfully, Lynn did it well and we were on our way back to where we needed to be.

We walked along the old town part of Heidelberg which was our first taste of old Europe and all of the beautiful architecture.  We found some really cool shops including a used bookstore that was about 3 stories high with a spiral staircase in the middle of it.  Katie was in a wonderland here.  She just loves books and to be surrounded by all of these treasures made her giddy with delight.  Of course, most were written in German, so we didn’t find any English books of interest for us, but it was still a really cool store.  This area of Heidelberg is like the idea of Branson Landing (if you’ve ever been to Branson, Missouri), put into 600-year-old buildings…aka charm galore!

Heidelberg university is also situated in this area and is said to be around 600 years old!  Imagine the feel of walking on a university campus that is older than our own country!

We lingered and enjoyed the day so much that we didn’t even have time to go up to the castle at the top of the hill.  We’re hoping to do that on another day.

Our first Sunday flying solo went very well.  At first, we were a little worried as, again, people showed up just right on time or a few minutes late, and I mean everyone.   However, we were relieved when they did show.  Our kids have taken on the challenge of running a Children’s Church program for the young ones which went very well.  We brought over some Abeka Bible story cards and the girls are each taking a week teaching the lesson while Jarod helps with singing and games and helping the little ones listen.

Lynn brought an awesome message called “Don’t Pray it Safe.”  He’s preached this before, but has to go through his sermons and do some editing for the cultural nuances and applications.  He did a great job of preaching and communicating his message without losing anyone language wise.  After service we realized that these folks like to talk about the message!  This is great as it provides feedback to Lynn on how they understood the message and it’s also encouraging to know that they aren’t just listening but are thinking it through as well.  This is always an encouragement to a minister when he knows that the crowd connected with the message.

After church a sweet family from the church, Rene and Marina, invited us to dinner with them at a local döner place that they frequent.  We enjoyed getting to know this sweet young couple and can sense we’ll be good friends through this experience.

Well, that’s the week two highlights.  More to come as we adjust to living here in Germany.

One thought on “Getting Our Land Beine (legs): Germany Week 2”