So my girls and I went groupie stalking the Pioneer Woman, Ree Drummond, again.  Really, she was asking for it.  After all she puts out this great new cookbook and comes right into town to have a book signing.  I was one of the first at the bookstore that morning waiting to get my ticket.  Only problem was, there was no “official” line formed until about a dozen or so people started milling around.  Then, when the manager comes out and says “form a line!”  I got pushed around like I was in a pinball machine.  Ok, maybe that’s an exaggeration, it really wasn’t that bad.  I was actually surrounded by other crazy people like myself and we were all enjoying it.  I ended up with line ticket number 9, not too bad I think.  I like to do this so I can get up to her while she’s still fresh and not sick of all the people and giving out the obligatory answers to all of our silly questions. 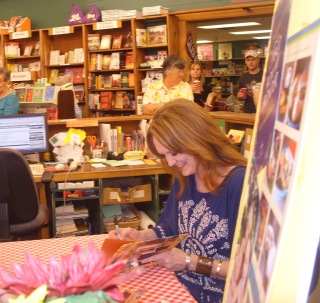 Actually I had a purpose in going this time, it was also to drop a couple of names and ideas by her.  Is that tacky?  Duh, you don’t really have to answer…I already know.  Anyway, I reminded her of how we church ladies were gawking at her husband at the fireworks stand last summer and forgot to put their sparklers in the bag.  (By gawking I simply mean we were awestruck at his famousness, nothing lusty I promise)  I think I even stated that last line to her.  So I proposed that she come on back and bring the Food Network with her this time and we’ll set her up well if she’d give us a second chance.  I even offered to deliver.  She responded graciously and took my husbands card.  Which makes me wonder where that card will end up?   Probably at the bottom of her purse and she’ll find it and read the crazy note on the back and call the police and give them my husbands name or something telling them to keep us away from her. 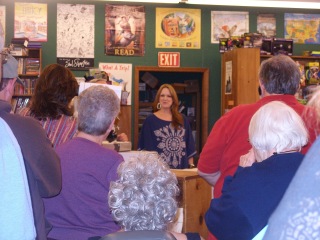 My second motive was to get my sis-in-laws recipe in her thoughts.  You see, Jessica is making up this fantastic recipe to enter into PW’s grilling contest.  The winner gets to take a friend and spend a day at the ranch and get on the show.  Jess and I don’t get to see each other very often and we’re both Food Network junkies so this is perfect! She is definitely the better cook and more creative of the two of us so I turned it over to her to do all of the work; I’d just tag along and gawk.   Now  if only I could get PW to see the beauty in all of this.  I explained this whole plan in 30 seconds or less feeling the pressure of the eyes of 200 other waiting fans behind me.  I’m not sure what she thought…probably back to the whole calling the police idea.
At the end of our two minute or less conversation she was sweet to include hellos to my girls and have a quick home school- lots of things in common- kind of talk.  Maybe they won her over for me.  I guess I’ll find out come May 17th when the contest is over and winners announced! 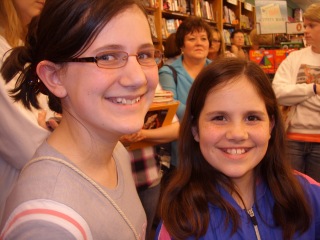 Hey, before you click away thinking I’m too brash or goofy you don’t even know what I didn’t say.  Like how I was going to sneak in a contract for use of her lodge when family comes in this summer.  Do you think that would’ve been too pushy. ..?