Skip to content
What a delightful interruption we had Monday evening at our house!  A mysterious ring at the doorbell about 7:45 brought two daughters of a friend of mine announcing they had “poop for Miss Jenny.”   I was so excited as my family stared at me in a strange dumbfounded way.  On the curb of our driveway they left me four yard bags filled with chicken droppings for my garden!  Yea me!  No seriously…Yea me!  What you’re not feelin the love here either?
To their defense, I had asked for the poo a few weeks before.  We had such a terrible gardening year last year and this time of year always gets me eager to start again.  I had heard from another friend of mine that chicken poo is great fertilizer in the vegetable garden, so I thought I’d give it a try. (2nd man still hasn’t caved on the issue of building me a chicken coop and buying chickens…but I’m still working on him. Look at the one I found on pinterest.)

To my eager surprise as well, yesterday turned out to be in the 60s outside!   I put my kids to work on their schoolwork, and gave the older two assignements to work on with their brother and I put on my scrubbies and headed out to the back forty (forty feet in my case).

I haven’t had tremendous success with the whole composting thing yet.  Mostly, it’s my fault.  With all the dryness and the type of compost bin we have, I haven’t been vigilant in watering and turning.  Last year, though we did, surprisingly get a good wheelbarrow full of the black gold.  This was a surprise since we had to fight the city over it.  In late fall the year before I had moved the bin back behind my mother-in-law’s cottage to the ally side hoping to get more sunlight in the winter.  It wasn’t near my trash area, however the trash men took it anyway.  Even more perplexing, they took all of the compost inside!  I was amazed.  I’m pretty sure that if I had asked them to scoop my compost by hand they would have abruptly refused.  Yet there it was, the empty spot where I had put my compost bin.  I called the department of waste management.  They sent two guys out to tell me that I had placed it on an easement and it was fair game, but they did yell at the trash truck guys about it.  What?!  I didn’t want heads on a platter; I just wanted my compost bin back.  After a series of phone calls 2nd man took over and called saying that he’d like the city to at least pay half for the new bin. We’d admit our mistake if maybe they could admit theirs too.  We’ll the guy finally caved and said it was easier for them to just buy us a new one so a new one I got. 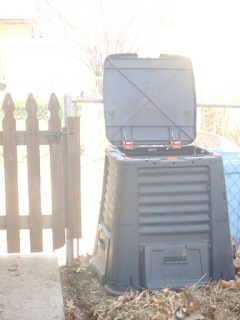 Anyway, my mom had warned me that the nitrogen in chicken poo can burn the plants already in the ground so I thought I’d empty the compost bin and restack it with layers of poo. 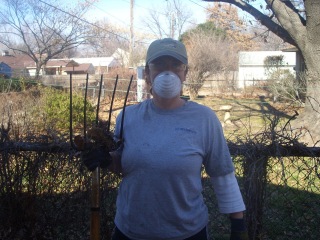 So, out came the pitchfork, glasses and gloves and mask (yes, chicken poo can be toxic to lungs nasal passages and eyes.
I was giddy with domestic bliss! 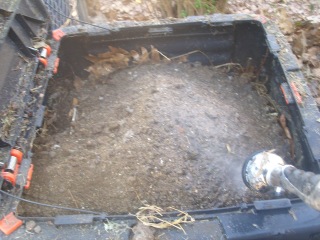 Wasn’t this poo beautiful?  My friend was nice enough to give me some that had been partially composted already…bless her!
So now, I’m going to be diligent about turning it and making sure it’s moist and hot. I might add here that never…ever in my growing up years did I think I’d say something like that previous line about chicken poo.  Amazing what comes with age isn’t it?  But I digress…Bring on spring!

4 thoughts on “Scoopin The Poo”

Leave a Reply to The Second Man's Wife Cancel reply