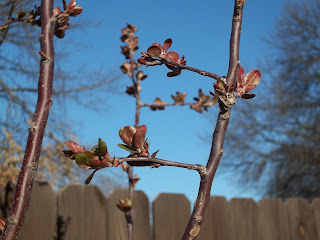 Well, spring is definitely upon us here in Oklahoma, well, at least every other day.  Hopefully, the warmth will become more consistent so these allergies of mine can somehow slow down a bit.  Allergies and snot aside, I have to say this is one of my two favorite times of year.  Fall is nice, and my other favorite, but spring just seems to abound with life, hope and cheer.
The time change is one near and dear friend of mine.  I’ve heard so much complaining the past week about people wishing “they’d” just do away with the time change.  Then, Sunday was a real hoot watching all the people show up for main services thinking they were coming to Sunday school.  That one always cracks me up.  Of course then you have those people that just rant about “losing” and hour of sleep.  This doesn’t make much sense to me…it’s an hour…not a day.  Go to bed early, or take a nap or something, but stop complaining.  It’s gonnna be light longer!!!  (Or seem that way), enough for me. 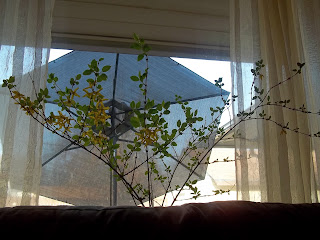 However, the time change isn’t really my focus today.  Today, I’m consumed with the excitement of seeing God work.  I’m fully aware of Hebrews 11:1 “Now, faith is the substance of things hoped for, the evidence of things not seen.”  But, what I mean here is that sometimes it seems like God gives us glimpses of his working in matters.  Kind of like when I go around my garden beds this time of year and start pulling away at the winter debris and last year’s spent growth to reveal, not a whole plant, put little peakers.  Small evidences of life that is wanting and waiting to spring forth.  It’s like little, green, waving hands that are saying, don’t give up!  There’s hope here!  Give me a little more time.
We seem to have several of these “little peakers” within our youth department right now.  I took one out for a coke the other day.  She’s one of our hopefuls.  Those of you in ministry understand.  One of those seemingly strong –beyond- her- years kind of girls for which we have high hopes.  Yet, recently she’s been wavering.  I’ve had her in my Wednesday night group.  I put her and a couple others there hoping to have a little help with the others in the group that I knew would be a challenge.  Instead, lets just say, I have the group that comes across more like late fall instead of early spring.  I go about asking our small group questions over the lesson that night and I get more response from the wall and carpet than any of these girls.  I’m not even talking about deep theological questions but those like “when we sin and act like the world how does that make God feel?” …response: chirp chirp chirp.  (that’s cricket sounds by the wayJ ).  Kind of a no brainer, but still, no responses.
I was really frustrated a few weeks ago and asked this girl to meet me at a local coffee shop after school.  I knew she was preparing for a trip to West Coast Baptist Bible College to view the school, yet she’s also holding out for a local college that, in my opinion, would be detrimental. Knowing this was coming up and watching some of her behavior lately, I wanted to pick her brain a little to see what was going on.  Turns out, the Wednesday night stuff is more of a “girl thing” with animosity running amuck among some of the factions in the group.  Yes, our teen department is imperfect and has cliques… Shocker!   Upon asking her of her future plans, she wavers a little, but has really felt the pull from God into some sort of missions.  With that said, I  tried to encourage her to stand up here and now.  I don’t underestimate the power of clique pressure, but sometimes teens don’t realize that they can do things here and now and not just in their future in a foreign land.  The talk went very well.  I’m thankful to say, that she is a girl who wisely listens to council and doesn’t just roll her eyes.  On her recent facebook posts from California she’s really on fire.  She was even able to share her testimony with someone on the plane trip out there.  Don’t know if she’ll choose that college, but she’s definitely trying to let the Lord guide. 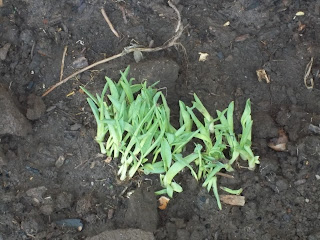 Then, another peaker last week.  A girl approached me after our Wednesday night program.  She wanted to talk and I wasn’t about to turn her away.  She comes from a divorced home and lives with her dad and step mom.  I have to give a little history here.  Her step mom was actually in our youth department.  When she met her husband, we knew it was not a right choice for her.  He was not saved and seemed against the idea of ever being so.  Sure enough they married anyway, and when she came out of her rebellion and back to the Lord, it caused trouble.  She’s struggled patiently for years over this, knowing that she did wrong to begin with.  However, God has blessed her patience and testimony.  Over the course of the past year her husband started coming to church.  He did this mainly to try to bring some peace to the house between his daughter and wife.  Well, guess what happened…yep….he got saved!  He now is one of our helpers in children’s church!  Faithless me never thought I’d see the day.  I cried and cheered the day he was baptized.

Well, as you might guess, this didn’t make the daughter happy.   She’s now thinking she’s created some kind of monster.  I asked her if he’s changed for the better to which she grouchily replied, “yes! Ughhhh now he’s like her (step mom).”  Anyway, she was full of questions.  I got the feeling that in some of them she was trying to shock me and get me to scold her or tell her how bad a girl she was.  She also looked me squarely in the face and said, “So how do you know the Bible’s even real?”  I responded and then she matter-of-factly let me know, “I just can’t give up my music, I don’t want to, I don’t want anybody to make me.”  I tried as gently as possible to tell her she didn’t have to.  She looked pretty perplexed by this response.  I continued explaining, “God doesn’t say you have to give up your music to be saved.  That’s not was salvation is.  He may work on you after the fact if it is wrong and something that should be given up.  But, nobody would be saved if they had to be perfect first.”  She seemed pleasantly shocked by this.  I think she was expecting me to be telling her how to dress and act and be.  She didn’t get saved that night, not even sure if she ever will.  However, I left with one of those exciting feelings that God had just given me a glimpse of his working on someone.  She’s definitely thinking and I challenged her to look up some verses after we met and ask God to show her her need. 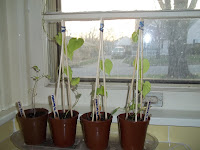 God has also sent us a couple of little spring encouragers.  There are currently a brother and sister visiting with us from out of state.  They home school so that they can travel with their mom and dad as their dad works construction around the country.  At first they were very quiet which is understandable.  Then, last weekend they joined us on outreach and got to know some of the kids.  The young mad went fishing with 2nd man and some other guys that very night.  Later, that weekend, they asked to be friends on facebook and 2nd man and I were just giggling over their excitement about our youth department.  We’re having a guy night and girl night activity later this week and they’ve gone on and on about it on their posts.  It’s kind of cute.  We know they’re only with us like two more weeks.  However, it’s been a shot in the arm for our teens and for the 2nd man and me.  I truly believed God sent them (probably among other reasons) to give us some encouragement.  Ain’t God good?
There have even been more of these spring glimpses within our extended family.  I’m not going to go into those here, yet.  But, suffice it to say I’ve had enough to be reassured and reenergized in my faith.  I look around my yard and get so excited to get out in the dirt and work.  Then I look around my world and get the same feeling right now.  Oooh weee! That’s good stuff!